You are here: Home / News / Winter Weather Advisory in effect for half of state 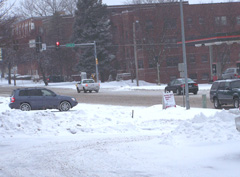 About half of Iowa is under a Winter Weather Advisory as heavy snow, strong winds and freezing temperatures are making for a miserable morning.

The advisory covers more than 50 counties across central and eastern Iowa, where up to five inches of snow is expected to fall.

Meteorologist Karl Jungbluth, at the National Weather Service, says a few inches of new flakes are already on the ground. Most of the snow will be falling in south-central and east-central Iowa while Des Moines, Ames and Waterloo won’t likely get any more snow than has already fallen this morning.

Jungbluth says the snow and blowing snow has made travel dangerous in many areas of the state — and accumulation could be heavy. The zone from Knoxville to Montezuma and Ottumwa toward Cedar Rapids and across east-central Iowa will be getting the most of the snow today, ranging from two to five inches of snowfall.

Jungbluth says the forecast calls for much of the snow to be done falling by midday, while deteriorating travel conditions may linger well into this evening. He says more snow may be on the way, but not much. No more heavy snow is expected but a couple of fast-moving systems could produce some light snow, likely on Friday.

For more on the forecast, see the National Weather Service website or for details on Iowa Road Conditions .