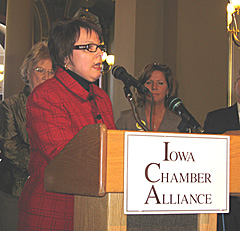 A coalition of 16 Chambers of Commerce, representing Iowa’s largest cities, is calling on lawmakers to take bold steps to grow the state’s economy.

The Iowa Chamber Alliance released its legislative agenda at a Thursday morning press conference at the Statehouse.

"We all know what the answers are to property tax reform," Durham said. "The problem is we know the answers, but we don’t have the political will to do what has to be done. I think what happens in challenging times is the citizens are going to demand that of our public leaders and, my gosh, we should."

Mundt says the plan could either be accepted or rejected, but not modified, by the legislature. That idea is similar to the way Congress handled a recent decision on closing U.S. military bases. Alliance executive director Dave Roederer says another option policymakers may want to consider would give individual counties the authority to devise their own taxation systems.

"All you have to do is look at Linn County right now," Roederer said. "They have a horrendous problem and under our current system, they do not have the taxing authority to even recover from the flood that they had. So, the question is – should we come up with a system that may not be universal throughout the state?"

Durham acknowledges that many of the recommendations face an uphill battle, but says lawmakers must take action to add jobs and attract new businesses. "The issues that face us are bigger than a political party. They’re bigger than Democrats, they’re bigger than Republicans and it’s going to take all of us to come together," Durham said. The entire report, which also includes a wish list for federal lawmakers, is available online at the Iowa Chamber Alliance website .