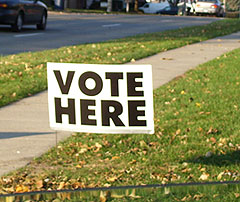 A lot of Iowans registered to vote on election day. Preliminary figures were released today by Secretary of State Michael Mauro, who is calling it Iowa’s first true test of election day registration a success.

According to the state’s 99 county auditors, 47,553 Iowans took advantage of election day registration when they went to the polls on election day.

"They added another three-percent to our vote totals and it went relatively smooth with very few problems reported," Mauro said.

The problems that did occur mostly involved people who did not have proper identification or poll workers that had trouble determining if the newly registered voters should use a provisional ballot or the electronic machine.

"We didn’t have any real cases of anybody reporting any types of activities where a person was trying to vote twice or individuals not being in the proper precinct, so those were good things," Mauro said. "We allowed many more people to participate in the process and we still kept it safe and secure."

Iowa is one of only eight states to allow election day registration. A record 1.54 million Iowans participated in this year’s general election.