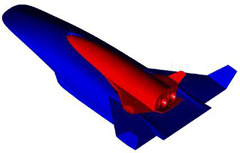 Atul Kelkar is the C.E.O. of V-S-I Aerospace and says the three-year contract is to lay the technological foundation for the new class of spacecraft, now known as the Vision Vehicle.

Kelkar says, “We are contracted to do some research by NASA to design tools which basically are the software tools that can help model this vehicle mathematically.” Early designs for the new orbiter call for it to be completely reusable and essentially two vehicles in one — a large booster plane that could take off like an airplane with the new shuttle on its back. The orbiter would separate at a certain altitude and go on into space, while the lower section would be piloted home.

Kelkar says, “These technologies are looked into for the military application, space exploration and also, eventually, for civil aviation.” He says this new spacecraft would be used for missions in “near earth orbit,” like launching and repairing satellites or visiting the space station — not for going to the moon or beyond. It will travel at speeds known as hypersonic, of up to Mach 22, or 15-thousand miles an hour, and reach an altitude of 150,000 feet.

Kelkar says it’s a dream come true for his small Ames firm to land this contract. “We basically eat and live and sleep with this project,” Kelkar says. “This is extremely exciting.” He says everyone is thrilled on the team, which includes several Iowa State University graduates and a number of current I.S.U. students as interns.