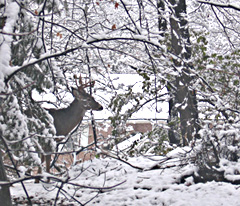 At least four Iowans were injured in hunting accidents this weekend. All of the accidents happened on the opening weekend of the shotgun deer hunting season and involved hunters striking another member of their party. On Sunday, a Grundy Center man escaped serious injury despite having a shotgun slug hit him in the chest.

Alan Foster, with the Iowa Department of Natural Resources, says 34-year-old Bradley Lynch may be alive today because of a button.  "We’re still pretty early in the investigation but we think the slug passed through the deer and then struck (Lynch)," Foster said. "(The slug) actually hit a button on his bib overalls or jacket and prevented it from actually penetrating his body."

Foster says one of the most important rules for a hunter to follow is to know where other hunters are located at all times. "That’s one of the main things we stress during hunting season," Foster said. "You really need to know where all your partners are in your hunting party…that’s one main way to prevent accidents."

In southwest Iowa on Saturday, an Arispe man was struck by a shotgun slug in the stomach. Foster says, like the incident involving Lynch, the slug that hit 41-year-old David Cheers did not penetrate the skin.

"Honestly, I expected the worst out of both cases," Foster said after hearing the hunters were hit in the stomach and chest. Also on Saturday, in eastern Iowa, 53-year-old Dale Rowson of Clinton was shot in the leg when a slug ricochet off the ground. Yet another accident on Sunday injured 55-year-old Daniel Rickelman of Fort Madison. He was shot in the leg while hunting near Fairfield in Jefferson County.