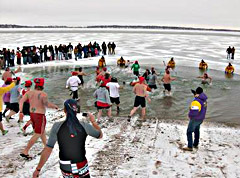 Organizers of Sunday afternoon’s Polar Bear Swim in Clear Lake now say more than $11,000 was raised for the Make-A-Wish Foundation.

Up to 200 people braved the freezing temperatures and took a quick dip in the lake’s icy waters. Arlan Ziegler was among those who took the leap.

Ziegler says the anticipation of waiting to make the plunge was worse than the actual jump. Some people dressed in costume for the event, including dozens of pirates. Before the event, a construction crane chipped out a large area of ice so the "polar bears" could wade in, as paramedics stood by in case the temperature shock was too much for anyone. No injuries were reported.

Travis Blakelow was part of the team from a local restaurant, L-D’s Filling Station. Blakelow says you just run in and run right back out and he adds, while it’s extremely cold, it’s worth it to raise money for the organization which grants wishes to children who have life-threatening medical conditions. Diane Arndt says it was her second year of jumping into the lake.

Even though she froze her toes and fingers, Arndt says it was fun and if you don’t take part, you should write a check to the charity. The Colony Inn Restaurant in Ventura raised the most money with $6,700 and had the largest team with 50 members. Some of the frozen swimmers were able to thaw out in a temporary outdoor hot tub that was set up beside the lake.