You are here: Home / Business / Governor says automaker bail out important for thousands of Iowa jobs 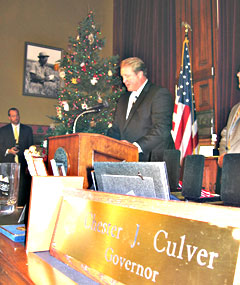 Governor Chet Culver, citing a report by the Economic Policy Institute, says Iowa could lose tens of thousands of jobs if Chrysler, Ford and General Motors went out of business.

The Democrat sent a letter to Iowa’s congressional delegation today  urging them to support legislation that would provide billions of dollars in loans to the automakers.

"There are about 35,000 jobs in Iowa that are impacted, either directly or indirectly, by the auto manufacturing sector in Detroit…suppliers for example," Culver said. The report from the Economic Policy Institute actually places the number at 33,900, or about 2.3% of Iowa’s workforce.

In his letter, Culver claims the three domestic auto manufacturers’ survival is critical to prevent further economic collapse. "At a time when we’re faced with some very serious economic challenges, we’re doing all we can to prevent further unemployment and job loss," Culver said. "That’s why I weighed-in with a number of other governors to urge (federal lawmakers) to find a reasonable way to help out."

The governor’s staff provided a short list of Iowa businesses that could impacted by the decision. That list includes Alcoa in the Quad Cities, Accumold in Ankeny and Eaton Corporation in Shenandoah. All of those companies make various parts for vehicles.

Culver may have a hard sell with a fellow Democrat. Senator Tom Harkin is still not convinced of the need for a bailout of the "Big Three" Detroit automakers. "I’ll have something more to say about it later, but I’m looking at it," Harkin said today during a telephone conference call with Iowa reporters.

"I don’t know right now. I’m just sort of examining it and considering if there are other options." Last month Harkin suggested bankruptcy wasn’t the "worst thing that could happen" to Chrysler, Ford and General Motors.

Later today, Harkin plans to go to the Senate floor and discuss the proposed bailout — and alternatives congress might choose. "Other options on how we might help Detroit and help the auto industry other than just giving money to the company," Harkin said.