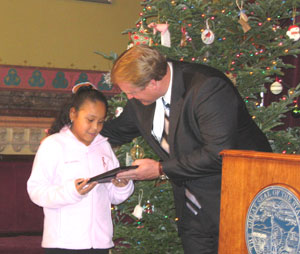 A seven-year-old girl from Tama was presented with the "Governor’s Lifesaving Award" today for her heroic actions at a hotel swimming pool one year ago.

"She pulled Laura up and out of the water and took her to safety," Meyer said. "Water gushed out of Laura’s mouth, but CPR was not needed due to Danielle’s quick ability to rescue her." Danielle says she was playing with her sister, Addy, in the pool when her mother yelled at her to rescue Laura. The toddler had wandered into the deep end of the pool.

"She went down in the water and was splashing," Danielle said. "Mommy yelled at her and then I went over to the (shallow end) where Addy could swim and went back to get Laura. I grabbed her and told her to quit splashing, I got you."

Danielle, who attends the Meskwaki Settlement School, describes herself as a good swimmer. She started taking swimming lessons at the age of four.