You are here: Home / News / Panthers want game in UNI-Dome to lead to Chattanooga 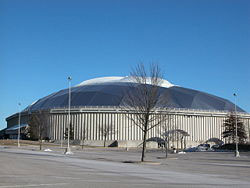 The UNI football hopes to earn a trip to Chattanooga and a spot in the national title game when they host Richmond in the semifinal round of the FCS playoffs.

After beating Maine and New Hampshire to get to this point the Panthers will play their third straight game against the Colonial Athletic Association.

UNI coach Mark Farley says he’d call them a running team with a big quarterback an "exceptional" tailback and big tight ends. Farley says it’s similar to the UNI team last year, big, strong and physical. After losing a number of key players off last year’s team that was ranked number one the Panthers hope to take another step toward a national title.

Farley says that makes it more pleasing and satisfying to see them grow over time, as he says they knew what last year’s team was, but they still don’t know what this team can be. Farley says the Spiders and Panthers aren’t going to try and fool one another. He says "this is just good football" as he says a scheme won’t win, two teams will line up and play and it will come down to a turnover or special teams play. He says it’s not about making it to the national championship game, it’s about playing well against Richmond.

UNI quarterback Pat Grace says they are glad to be at home, again. He says playing in the UNI-Dome is awesome as there’s no weather concerns and the fans are loud. Grace says are getting used to playing teams out of the CAA, as there are three or four teams in the playoffs.

Senior defensive back Terrell McMoore says the Panthers feel like they are an underdog. He says noone expected them to have the season they are having and that made them play with more of a chip on their shoulder. McMoore says they hope to take advantage of the home field. He says having one more home game is good and he says after seeing Appalachian State lose, they knew that anyone wanting to go to the championship would have to go through the Dome.