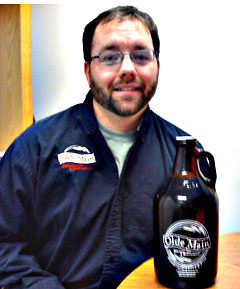 A central Iowa company that started with a handshake over a beer is now planning to expand its operations statewide.

Jeff Irvin is the head brewer for the Olde Main Brewing Company, which started with a restaurant and bar in downtown Ames in 2004.

A year earlier, Irvin had earned a biology degree from Iowa State University, but wasn’t sure to do next.

The Dubuque native was working as a bartender and told his boss, Scott Griffen, he would go to brewing school if Griffen would buy a building for a brewpub. The deal was sealed over a drink. Today, while many companies are struggling to survive, business is booming for the Olde Main Brewing Company. Irvin says sales have grown by 200-percent since May, when Olde Main launched its bottling line.

“It was demand, people were asking ‘when are you going to bottle?’ So, we decided to go ahead and do that,” Irvin said. “We started out very small, but we’re in probably over 200 retail spots now with that bottled product.” Setting up the bottling operation cost about 250-thousand dollars. Olde Main sells six varieties of beer, a seasonal draft and a root beer.

Demand is strong enough that Irvin and Griffen are looking for another production facility. Iowa law has created some challenges for the company. Because the brewery is part of a restaurant that sells other alcoholic beverages, it must first sell its product to a distributor who then sells it to other businesses – including Olde Main.

“I can’t directly sell you a six pack of our bottles or any of our keg beer. I have to send it down to a distributor, buy it back and then I can sell it to you,” Irvin explained. “So, that’s one of the subtle nuances to the Iowa law.”

The company is just starting to distribute its craft beer to Waterloo and the Council Bluffs area. Irvin and Griffen hope to expand distribution of Olde Main Beer statewide within a year.