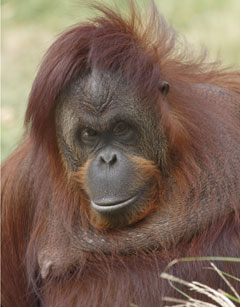 Trust scientist Serge Wich and others have documented the whistling of a 30-year-old female orangutan named Bonnie at the Smithsonian National Zoological Park in Washington, D.C.

Wich says Bonnie apparently learned to whistle by hearing a trainer, something that immediately caught his attention.

Wich says Bonnie isn’t getting any attention for doing this and she seemed to be just copying the whistling just for the fun of copying it. He says her actions give them new insight into the animals.

Wich says they know that there are differences between the sounds different populations of orangutans make in the wild, but they are trying to find a way to explain the differences. He says the whistling orangutan indicates the apes can learn sounds spontaneously without being trained. Wich says they knew orangutans could imitate others, but it’s new to have them imitate sounds. He says they see orangutans at rehabilitation stations who learn to use soap to wash clothing, but the research has said their vocal domain is very limited and they aren’t supposed to be able to imitate sounds.

Wich says in the past people have always tried to see if apes can talk or speak English. “And I think that sort of distracted us because that was a way too complicated question,” Wich says, “now we should observe what they do in the wild and see whether they can learn those behaviors and than take it from there, instead of looking at our own behavior and see if they can copy that.”

Wich and fellow researchers published a paper in the scientific journal Primates, detailing their research. They also shared anecdotal information about Indah, a female orangutan who lived with Bonnie at the National Zoo before moving to Great Ape Trust in 2004. Indah also began to whistle some years after Bonnie was first observed making the sound in the late 1980s, but Indah died before recordings could be made of her whistles.

Scientists believe that Indah’s whistling was a vocalization learned from Bonnie. For more information and to see a video of Bonnie, go to the Great Ape Trust’s website.