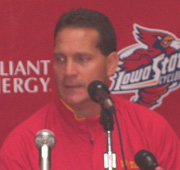 Several news outlets, including the Birmingham News and ESPN are reporting that Iowa State University football coach Gene Chizik will become the head coach at Auburn.

I.S.U. athletic director Jamie Pollard confirmed Friday that Chizik interviewed for the job and was a strong candidate for the job. Pollard refused any further comment on the issue.

Chizik was just 2-10 this last season and did not win a Big 12 Conference game. But he was the defensive coordinator at Auburn for 3 seasons. Chizik’s 2004 Auburn defense led the nation in the fewest points allowed..

He left Auburn to become the defensive coordinator at Texas. Chizik has a 5-19 record in two seasons with the Cyclones.