You are here: Home / Politics / Govt / Iowa electors cast their votes for Obama 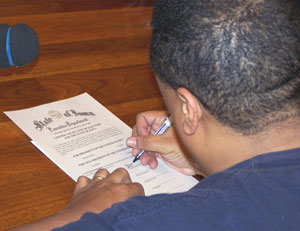 The seven people charged with casting Iowa’s electoral votes for president met with the Governor in Des Moines today to sign the document that officially records their votes.

Slayton Thomas of Cedar Rapids read the document they each signed.

Slayton read the words that said all seven votes from Iowa went to Barack Obama for President and Joe Biden for Vice President.

Although Obama won the popular vote in Iowa, the electors were not bound by law to cast their ballots for him, and they say they heard from a lot of people who tried to get them to vote differently. Jon Heitland of Iowa Falls says the letters started coming a couple of days after the election, and then they started getting e-mails. 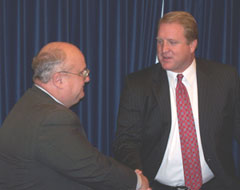 "And last weekend we even got a Fex Ex package with materials saying he (Obama) is not a natural born citizen, it’s your duty not to vote for him," Hietland says, "My feeling is, if that were true, that would have been established long ago, we in Iowa know how long the presidential selection process is, it’s been going almost two years."

Heitland says he believes people are just unhappy with the results of the election and they’re trying to have one last shot at changing the results.

Iowa’s delegation in the Electoral College consists of seven members, one for each member of Congress and U.S. Senator. After today’s vote, the results of each states’ votes will be sent to the U.S. Senate for the official vote formally naming Obama as President-elect and Biden as Vice President-elect.

The other electors are: Elwood Thompson of Waterloo, Kathleen O’Leary of Des Moines, Dennis Ryan of Onawa, Joe Judge of Albia and Audrey Linville of Davenport. Joe Judge is the son of Lieutenant Governor Patty Judge.