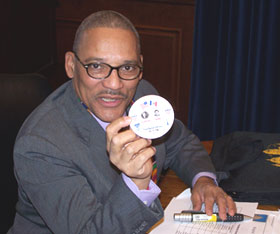 While Barack Obama will be the first African-American to become president of the U.S., one Iowa elector says Obama’s qualifications, not his race are the things to stress.

Slayton Thomas of Cedar Rapids is one of seven Iowans who cast their electoral votes for Obama Monday.

Thomas says if he wasn’t an African-American, it Obama’s election might have "real big significance." Thomas says he’s from a family of 14, he’s watched Julian Bond, eaten with Rosie Parks, spoken with Jessie Jackson, all Sharpton and other black leaders.

"I think it’s supposed to happen if you’re qualified, it’s normal," Thomas says. He says he doesn’t want his kids to think it’s something unusual to have an African-American as the president, "Because what happens if he’s not good?"

Thomas says Obama should be judged on the way he handles the office and deals with the economic problems. Thomas asks what happens if Obama gets impeached, or the economy gets worse. "Is that a race thing, no it’s not, no this man has earned the right to be in this spot," Thomas says. Thomas says electing an African-American president is good for the country, but he says it’s not a magic solution to all the problems of history.

"It’s not a healing process, things won’t go away, it won’t erase the Civil War, it won’t erase the ethnic cleansing that’s gone on in Darfur, it won’t erase the bitter hatred, no those things will always be with us, the Bible says that…," Thomas says, "but is shows a certain maturity of America." Thomas was an elector once before in 1992 for President Bill Clinton, and says he was surprised to be able to get the chance again.

The seven electors signed the paper designating their seven votes for Obama and it now goes to the U.S. Senate which will officially name Obama the next president.