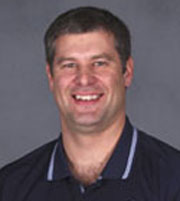 Rhoads was raised in Ankeny, Iowa. Rhoads was the defensive coordinator at Pitt before moving to Auburn. Rhoads also has a history at ISU as he was on the first staff of former Cyclone head coach Dan McCarney.

Rhoads will be introduced to the news media at 5 p.m. in the Jacobson Athletic Building and to Cyclone fans at halftime of the men’s basketball game tonight against Jacksonville State. Rhoads had this to say in a statement released by the I.S.U. athletic department:

"It has been a professional goal of mine to become a head coach since my dad introduced me to the game as a kid and I could not have found a more perfect place than Iowa State," said the 41-year-old Rhoads. "I know how special Ames and ISU were to me during my first tenure and having the chance to return and lead this program reads like a Hollywood script. I want to express my most sincere appreciation to Dr. Geoffroy and Jamie (Pollard) for the opportunity."

Rhoads agreed to a five-year deal worth $5.75 million in guaranteed compensation with incentives available to increase that total.