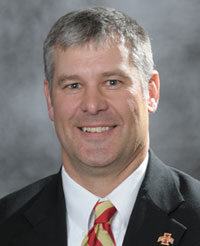 There is no doubt that Paul Rhoads wants to be at Iowa State. The Ankeny native and former Cyclone assistant was introduuced as ISU’s new football coach on Saturday, one week after Gene Chizik resigned to take over at Auburn.

Rhoads spent this past season as the defensive coordinator at Auburn and prior to that was at Pittsburgh. He was a part of Dan McCarney’s staff in the late 90’s when the program got turned around.

Rhoads comes from the defensive side of the ball but knows how important offense is in the Big-12. He says they will be physical on offense and make teams defend the entire football field. Rhoads says the bottom line is putting points on the scoreboard to win.