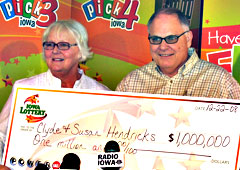 A family from Marion is certain to have a merrier Christmas after becoming the state’s latest millionaires.

“I didn’t even know what that was, but I said ‘okay, why not?’ Then we went home and promptly forgot about,” Clyde said. The Power Play number was five. Because the Hendricks added the Power Play option to their ticket, the normal $200,000 prize was multiplied by five. The Hendricks learned there was a winning million dollar Powerball ticket, purchased in Swisher, while watching the television news Sunday night.

So, what does it feel like to win a million dollars? “It’s almost a numbing feeling,” Susan said. Clyde agreed, “Then you think, well, obviously I read the numbers wrong.” The Hendricks confirmed that they were holding the winning ticket with a trip to the Iowa Lottery office in Cedar Rapids this (Monday) morning. Susan, who is 63, is working at Kirkwood Community College. Clyde is 62-years-old and is an engineer at Vector Corporation in Marion. They both plan to keep working.

Susan says they’ll pay off some bills and enjoy an upcoming vacation to the Wisconsin Dells with their two children and four grandchildren. “I think we can probably make this just a little bit more special of a trip,” Susan said. “I think so,” Clyde added, “and maybe another trip in the future. We lost quite a bit of money from our 401Ks, so I was considered when I’d be able to retire. I think this has probably changed that. I probably won’t retire in the near future, but at least there’s some flexibility, which I don’t think we had before.”

Susan says the windfall comes at a good time. “What a miracle this is for us…you can’t even imagine the peace it gives you to know that you can truly retire someday and don’t have to worry about everything,” Susan said. Clyde says a portion of their winnings will also help families that are less fortunate.

“There’s been a lot of devastation in Cedar Rapids from the floods and such,” Clyde said. “We’ll probably end up giving some of the money to the flood victims…just do what we can and spread it around, because we’re blessed.” After taxes, the Hendricks will actually take home around $700,000.