You are here: Home / Politics / Govt / Grassley says Obama picture no cause for concern 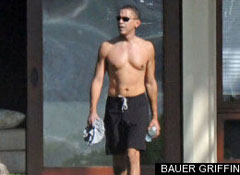 A topless color photo is the subject of much buzz on the Internet and the morning talk shows. It’s not a picture of a Hollywood starlet or singer, but of a shirtless President-elect Barack Obama on a beach in Hawaii.

One website features the photo with the caption "Pec-tacular President-elect." Iowa Senator Chuck Grassley says he’s not worried such photos will harm the office of the president.

Grassley says: "What you have to consider here is how he handles the presidency and how he handles things like this in the future and whether he does stupid things as a president. I think if you could look back at Chuck Grassley, although they probably never had as many pictures then as they do now, but maybe I even did something stupid."

The picture shows Obama, clad in black swim trunks and carrying a water bottle and perhaps a t-shirt.

Grassley says he’s not surprised the photo is causing such a stir in the media and on-line. "When you consider our First Amendment freedom of speech and freedom of press and the responsibility of the press to be even keel towards both political parties, I think we would expect the press to be doing what’s going on," Grassley says. "Is it harmful to the presidency? I don’t think so."