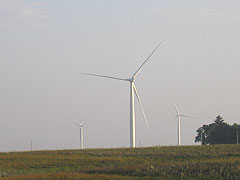 The Iowa Power Fund board has finalized contracts with six more research efforts to develop alternative energy sources in the state.

It signed off on grants worth nearly six million dollars this morning. The recipients include the Amana Society, which is working to convert methane gas from livestock manure into fuel.

Researchers at Iowa State University also received funds to continue developing more efficient solar cells. The director of the Iowa Department of Economic Development, Mike Tramontina, says the Ames company that is using the research recently announced a building expansion and the addition of 60 jobs.

"This research is leading to real positive commercial activity and growth in our state," Tramontina says. The Iowa Power Fund has invested nearly 30-million dollars in alternative-energy projects since it was created in 2007. It was meant to be a $100-million, four-year program but some legislators have recently questioned its future because of the shortfall in the state’s budget.