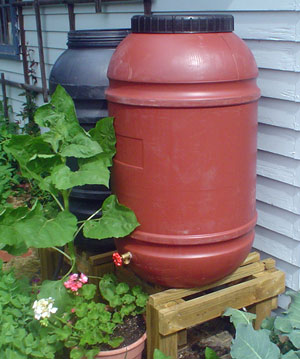 The City of Ames Public is offering help for residents of the central-Iowa city that want to buy a rain barrel for their home.

Murphy says the rain barrels collect the storm water off of your roof and stores it for watering plants and gardens instead of using the treated water coming out of faucets.

Murphy says using the rain barrels fits in with the national agreement the city singed onto that seeks to improve the environment.

Murphy says the city provides residents with $75 to help buy a rain barrel. Ames residents have a choice of from three different rain barrel designs, ranging in size from 54 to 95 gallons. The cheapest barrel is a re-used food grade barrel that is $115 before the $75 city cost share. There’s another barrel that she says is "more high end" and costs $238.

The largest barrel is almost square, costs $259 and sits at the side of the house. That barrel can be painted to blend in with your house. Collecting rainwater used to be something that was done by many rural Iowans. Murphy says cisterns were common on rural farmsteads, but aren’t now in urban areas. Murphy doesn’t know of any other Iowa cities that are using rain barrels, but says it’s not a new concept.

She says bigger cities like Chicago have an extensive rain barrel programs and on the west coast where water shortages are more of a problem, they have quite a few rain barrel programs. The city is offering the cost sharing program to the first 150 residents who apply. More information about the rain barrels can be found on the Ames city website .