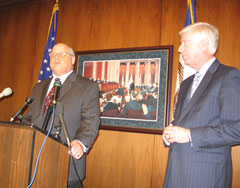 In addition, Miller says he’s "reaching out" to media groups, asking them to report violations of the laws. Citizens are also encouraged to report violations to the state Ombudsman’s office, who in turn will refer serious cases to the Attorney General’s office for prosecution.

State Ombudsman Bill Angrick says his office has received around 275 complaints this year and describes 40 of them as "substantial."

"My sense is, in a democracy, transparency is ultimately one of the most important elements of our type of government," Angrick said at a Tuesday morning press conference. "If we don’t have transparency, we don’t have accountability and definitely right now we’re in some very challenging and trying times where we need the ultimate of both."

Miller is reversing an earlier decision to rely on local authorities to enforce sunshine laws. "Unfortunately, what happened I think over time is that there became a vacuum," Miller said. "There was an area where the law wasn’t being enforced and we’ve concluded that’s not a good situation."

Miller cited three cases that have been resolved by his office in recent months. Those cases involved a library board in Ida Grove and city councils in Pacific Junction and Winfield.