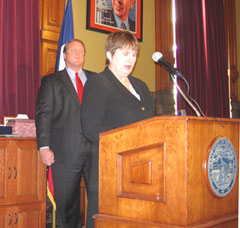 The five-member Worker Misclassification Task Force issued the report today (Tuesday) to Governor Chet Culver, who backs a proposal to hire nine employees to keep companies from skirting the law.

The plan would cost around $771,000. "Obviously, given the budget challenges, we might not be able to fully fund it," Culver admitted at a statehouse press conference.

However, Culver will ask the legislature for full funding because he says improperly classified workers are wrongfully deprived labor laws related to workers’ compensation, unemployment, overtime and family medical leave.

"And number two, any way that the state can generate revenue, I’m for," Culver said. Worker advocates say some employers improperly classify workers as independent contractors to avoid paying normal payroll-related costs and taxes. The report suggests the formation of a special Misclassification Unit would pay for itself through the additional tax revenues to the state treasury.

Iowa Workforce Development Director Elizabeth Buck, chairperson of the task force, says her agency does not currently have the resources to focus on the misclassification issue. She’s hoping Iowa will join other states that hiring workers to enforce the labor laws. "I think there are more than a dozen states that have taken on this issue," Buck said. "One of our neighboring states, Minnesota, found that 14% of their businesses were misclassifying at least one worker. So, it’s a pretty prevalent problem." The task force issued six recommendations in its report, which is posted on the Iowa Workforce Development website .

"Two weeks ago the governor was forced to implement across the board budget cuts. Then last week his own department heads asked to increase their budgets by 5.7 percent. Now the governor wants to spend almost $1 million on a task force. During this time of economic uncertainty, the governor should be looking for ways to save taxpayer dollars, not spend more of them.

"I am amazed that the governor doesn’t think the 2,600 new state employees he authorized in the last 2 years are enough. Further, these additions the governor proposes are being made to address an issue that I have yet to receive a single constituent contact on."