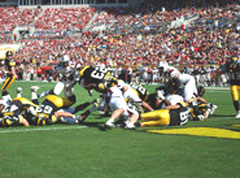 “South Carolina had a great defense and then we were able to execute like we wanted to,” Greene said after the game during an interview on The Hawkeye Network from Learfield Sports. Coach Kirk Ferentz called Greene a “first class human being.”

“Can’t say enough about the kind of team member he’s been,” Ferentz said on the same post-game program. “Obviously what he’s done in terms of production has been very, very impressive, but more impressive to me is the way he’s handled himself, conducted himself.”

Greene carried the ball 29 times today, rushing for 121 yards. He scored 20 rushing touchdowns for the Hawkeyes this season, including the three in today’s bowl game — an all-time University of Iowa record. He also rushed for a record 1851 yards this season.

“You know, going into every game we pretty much know it’s going to be tough in the beginning of the game because a lot of people like to key on me and the defense is taught to stop me,” Greene said after the Outback Bowl. “…Our job is just not give up on the running game and keep plugging away.” Greene and his coach gave credit to the offensive line and the play-calling of Hawkeye quarterback Ricky Stanzi.

A year ago Greene was trying to raise his grades and he had a job moving furniture. Greene calls his own “rags-to-riches” story “unbelievable.” He’s due to go home and visit his family Friday and will make a definitive announcement on “going pro.”