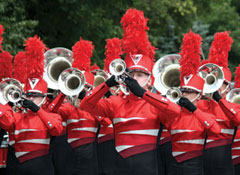 Two groups from Iowa are preparing for a trip to Washington, D.C. to perform in the Inaugural Parade.

The Isiserettes Drill and Drum Corps of Des Moines and the Colts Drum and Bugle Corps of Dubuque will both march down Pennsylvania Avenue following Barack Obama’s swearing-in ceremony on January 20th.

Pam Williams is a volunteer with the Isiserettes, a group formed in 1980. She says the drummers and dancers, who are between 7 and 19 years old, will remember the trip the rest of their lives. "I told them, when you get down about 20 years and you got kids and grandkids and this is a part of history, you can look back and remember that you were actually a part of this," Williams said.

The Isiserettes performed before Obama’s Caucus night victory speech in Des Moines last January. Greg Orwoll is executive director the Colts. Since 1963, the group has performed in stadiums and contests across the country. "I can’t imagine anything that comes anywhere close to the prestige and just the humbling honor that this represents, to be in the Inaugural Parade representing Iowa," Orwoll said, "particularly with Iowa’s key role in President-elect Obama’s election."

The Isiserettes and Colts are two out of around 100 acts invited to march in the parade. Nearly 14-hundred groups applied. Orwoll has invited Colts alumni to join the 135 current members on the trip to D.C. The organization will spend around 60-thousand dollars to bus and house all the participants.

"We also have to provide all the meals and buy additional instruments and uniforms," Orwoll said. "For the color guard, we need a complete new uniform for them that will be a little more (cold) weather appropriate." The Colts will leave for the nation’s capital on January 17th with four to five busses, two vans and a truck.

The Iowa participants in the parade will stay in either a high school gym or on a military base during their time in Washington, D.C. In addition to marching bands, the nationally televised parade will include military regiments, citizens’ groups and floats. The Colts and Isiserettes’ organizations are both accepting donations to help pay for their trips.