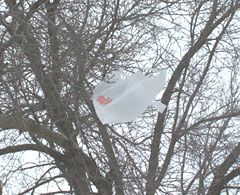 The city council in Iowa City is scheduled to discuss a possible ban on plastic grocery bags today (Monday). City leaders will discuss the matter in a work session.

It’s not clear if the idea will ever become an agenda item in a formal public meeting. Iowa City Recycling Coordinator Jen Jordan plastic bags present an environmental hazard on a number of fronts.

"It’s really about the sheer volume of these bags being out there," Jordan said. "They’re a major litter issue and they don’t biodegrade in the landfill. In fact, very little biodegrades in the landfill if we do our jobs right because we don’t want things to break down and get into the ground water."

Jordan isn’t sure a full ban is feasible for Iowa City and says other measures might include a tax on plastic bags, incentives for reusable bags or a general education campaign. She says more shoppers should consider using reusable canvas bags. A number of U.S. cities have considered plastic bag bans, but San Francisco is the only one to pass such a measure.