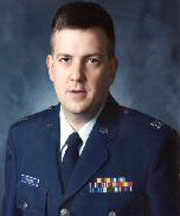 A 44-year-old eastern Iowan who is a former officer in the Air Force and has earned not only an M.B.A. but a law degree is the new voice for Republicans in the Iowa House.

Republicans who’ll serve in the House when the legislature convenes Monday met eight weeks ago and elected Kraig Paulsen of Hiawatha their new leader.

Paulsen was born in Monticello and in 1965, his family moved to Cedar Rapids where his father set up a veterinary practice.

After graduating from Cedar Rapids Kennedy High School, Paulsen got a degree in business administration from Iowa State University. "Then I joined the Air Force. My last assignment in the Air Force was at Vandenberg Air Force base out in California where I was the operations officer of a training squadron where we taught maintenance on everything from air-launched cruise missiles to the Space Shuttle," Paulsen says. "While I was in the service, I also got an M.B.A. from Embry-Riddle Aeronautical University."

Paulsen returned to Iowa in 1998 and worked at a manufacturing company before returning to the classroom. "I went back to school on more time and I got my law degree from the University of Iowa in 2003," Paulsen says. "Practiced for about two years in private practice and now I am in-house counsel for CRST International." C-R-S-T is a trucking and transportation company.

Just before he graduated from law school Paulsen ran for the legislature and a little more than six years after winning that first race he’s won the role of Republican leader in the Iowa House. Paulsen admits to an "Air Force methodology" when it comes to his leadership style. "Very goal oriented. I set objectives and work towards those objectives," Paulsen says. "I try very hard to include everybody in moving towards those, identify individual objectives for whether it’s a member or staff or whoever it is and then get out of their way and let them do it."

Paulsen and his wife, Cathy, have four children who have been schooled at home. Paulsen and his family were living on an Air Force base in Minot, North Dakota, when his oldest daughter reached kindergarten age. "There was an elementary school on base there and we just weren’t real happy with a couple of the things we heard and we…said to ourselves, ‘You know, you can’t really screw up kindergarten, can you? So, let’s experiment,’" Paulsen says. "…I guess we’re in our 15th year (of home schooling). My daughter graduated from high school two years ago. She’s now a junior at Mount Mercy with far better grades than I ever dreamed of having and it’s just proven very successful for our family."

Military families typically move about every three years and Paulsen says rather than switch schools every time the family moves, many parents in the military home school their children. "It was very consistent with that lifestyle," Paulsen says.

Paulsen taught his kids math when they were young, but he admits his wife does most of the instruction these days. Paulsen does check the homework. "And I had a lengthy discussion with my boys last night before I left town about, ‘School starts in the morning, what does that mean?’" Paulsen said during a Monday morning interview with Radio Iowa.

Paulsen tapped his index finger on a conference table as he recounted his conversation with his three sons, then Paulsen laughed. "So I’ll get a report later today to see whether they took the discussion seriously."