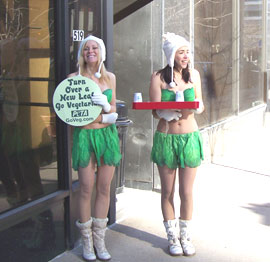 Ashley Byrne and Virginia Fort shivered in the 40-degree temperatures, wearing only bikinis designed to look like leaf lettuce.

Byrne is a campaign coordinator with PETA – People for the Ethical Treatment of Animals.

"Today, we came out to encourage people to turn over a new leaf in the new year and go vegetarian," Byrne said. The sandwiches were made with tofurky, a meat-less product that Byrne insists "tastes just like turkey."

Byrne says tofurky, unlike turkey, is "free of cholesterol and the cruelty that comes with a meat sandwich." Not everyone passing by was interested in the free food or hearing about the benefits of a vegetarian lifestyle. One man stopped his car in front of the women, took a picture with his cell phone and drove off.

The women also handed out PETA pamphlets and Byrne talked about what the group’s undercover investigations have found at corporate livestock farms around the country.

"Practices like cutting off the tails, testicles and teeth of animals without any painkillers and slaughtering animals by stringing them upside down…and slitting their throats while they’re still conscious have become standard in the industry," Byrne said.

The most recent, high-profile case of livestock abuse in Iowa occurred last September near Bayard in Greene County. Seven employees were fired from the pig farm that supplies Hormel Foods in Austin, Minnesota. An investigation was launched after PETA released "undercover video" of the abuse.