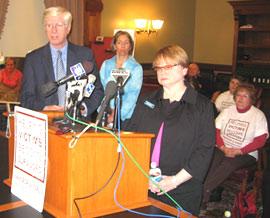 Iowa Attorney General Tom Miller says crime victim programs around the state are at risk of being eliminated if the legislature fails to provide up to four-million dollars in funding.

Miller spoke at a statehouse press conference Wednesday and said he understands lawmakers are working with a tight budget.

“But nothing is more important than the public safety of the individuals of our state and our communities,” Miller said. The request would maintain the current funding levels for 31 programs in Iowa that aid victims of domestic abuse and assault. Miller says those programs provided aid to 26,000 victims last year. The state legislature began allocating funding to local victim services programs in 1979.

In 2002, the legislature cut off the appropriation and since that time, reserves from the Crime Victim Compensation Program have been tapped. Miller says those reserve funds will essentially run dry at the end of this fiscal year. Beth Barnhill is the executive director of the Iowa Coalition Against Sexual Assault.

“Domestic violence and sexual assault programs are essential community services – relied on by law enforcement, prosecutors, health care providers, schools and victims themselves,” Barnhill said. She says nine programs around the state were eliminated in 2002. Those programs were located in Des Moines, Cherokee, Algona, Knoxville, Waterloo, Shenandoah, Waukon and Jefferson. Barnhill says services to victims are already stretched too thin for more cuts.

For example, four programs are responsible for providing victim services to a 33 county area. “These service areas are not practical in helping victims of sexual assault and domestic violence,” Barnhill said. If the legislature fails to provide another four-million dollars, Barnhill says the 31 programs will likely be trimmed to 22.

“Without (the funding), approximately nine of Iowa’s current programs – which serve an average of four counties each – will close,” Barnhill said. “We realize that these are tough economic times, but we also know from our experience that tough times lead even more Iowans to seek services. We can not allow those seeking assistance to find doors to safety closed.” Mary Ingham is the director of Crisis Intervention Service in Mason City. Her agency serves eight counties in north-central Iowa. Ingham says a loss in funding could force the closure of shelters for victims of domestic violence and sexual assault.

“Shelters are so much than just a roof over a victim’s head,” Ingham said. “Shelters are a basic life-saving option for victims…they’re the final safety net when all of our other options and systems have failed victims.” However, she notes that shelters account for just 10-percent of the services provided to assault victims in the state. Ingham says her agency has six offices in the eight county region. Most of those offices have just one employee.

“We don’t have a lot of fluff in our budget to cut,” Ingham said. “Our request is simple – help us to maintain. Any decrease in funding has an immediate impact on our ability to provide services to victims of abuse.” Senate Democratic leader Mike Gronstal of Council Bluffs says finding money for the victim services programs won’t be easy, but it should be a priority.

“Our efforts are going to be to maintain those important funds in state government, obviously victim assistance would be high on the list of funds we want to preserve,” Gronstal said. House Democratic leader Patrick Murphy of Dubuque said he could not make any promises about funding for any state programs. Gronstal agreed.

“Kind of last on somebody’s list to cut would be victim’s services, very obviously. We’d like to do our best to preserve that…but I don’t know if we can,” Gronstal said.