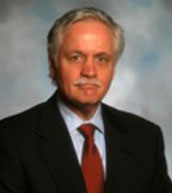 The new leader of Republicans in the Iowa Senate expanded a southern Iowa business just when the economy was in a severe recession, back in the late 1970s.

Sixty-one-year-old Paul McKinley grew up in Russell, became an Eagle Scout, got a degree from the University of Iowa and took his first job — working for state government.

"With Governor Bob Ray’s ‘Model County’ program in Corydon, Iowa, and it was a program designed to address many of the economic and social issues that we face as a state today, working with local folks to move the economy forward," McKinley says.

But McKinley soon moved to a job in a business in Corydon. "What we did was manufacture garment bags for clothing stores and it was during a time period when independent men’s clothing stores were going broke. The owner came to me one day and he said, ‘You know, I just can’t face the stress any longer. I’m going to retire,’" McKinley says.

"This was when interest rates were 20 percent-plus. The inflation rate was 13-14 percent…and I mortgaged myself to the hilt. I borrowed any penny that anybody would loan me and I bought the company."

McKinley admits he bet his young family’s future that he could turn Neeley Manufacturing around. "We had to completely redesign the product line. We had to develop new markets, new distribution channels," McKinley says, "and after 10 years, we had tripled the size of the company, employing a couple of hundred folks working shifts in three different factories."

McKinley says he’s proud his company was providing jobs in rural Iowa during the Farm Crisis. McKinley sold his share in the company in the early ’90s and went into semiretirement.

McKinley, who now lives in Chariton, admits he entered politics about a decade later on a fluke, running against a well-known state senator who’s the husband of Lieutenant Governor Patty Judge. She was serving as Iowa’s Secretary of Agriculture back then.

"I just worked hard, knocking on 10,000 doors, visited with a lot of people and talked about education and economic development and at the end of the day, I’d won the election…which I think came as a surprise to a lot of people," McKinley says.

McKinley describes himself as "data driven." "I call things as I see them," McKinley says. "I don’t try and put spin on any issue."  In mid-November McKinley’s Republican colleagues in the Iowa Senate elected him as their leader and it’s no surprise his leadership style is what you’d expect from a retired businessman.

"Whereas government has a tendency to look at process, my emphasis would be looking at results," McKinley says, "looking at measurable objectives." McKinley’s number one objective for the 2009 legislative session is "fiscal responsibility" on the part of state government.

"We must be able to live within our means. That’s absolutely critical," McKinley says. "Iowans are taxed to the point where they can pay no more taxes. Our future growth depends upon us having an environment which educates kids and is conducive to job growth and if we continue to increase taxes which are already among the highest in the nation, we’re going to continue to see slippage and see jobs move out-of-state."