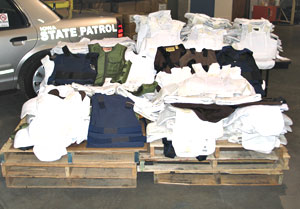 The Iowa Department of Public Safety and State Patrol turned over 150 used bullet proof vests today to a representative of the Nebraska Attorney General’s Office for a project to help fight gangs in El Salvador.

Pat Mason of Nebraska leads the project and says it came about through work with the National F.B.I. Academy and the fight against the M-S-13 gang.

Iowa and Nebraska work through the same chapter of the F.B.I. Academy Associates and Story County deputy Barry Thomas is an Iowa representative for the group. Thomas says from a liability standpoint, once the warranty is up on the vests, they are no longer useful for Iowa law officers. He says the El Salvador National Police don’t have the same liability issues and can use the vests.

"They need something to help save their lives when they are dealing with these violent gangs and drug cartels, so for us to recycle if you will, equipment that we can no longer use, but get such a great value down there, is truly, truly a wonderful thing," Thomas says. 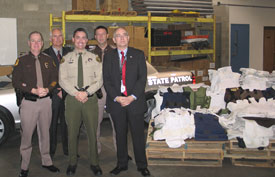 Captain Thomas says the vests cost around $600 new and generally have a warranty of four to five years before they are taken out of service. Story County is donating 22 used vests.

Colonel Patrick Hoye, the leader of the Iowa State Patrol, says they were anxious to take part in the program.

Hoye says they felt it was a great opportunity for other law enforcement officers to use the vests that they can no longer use. Mason says they are still working out the details of sending the vests to El Salvador.