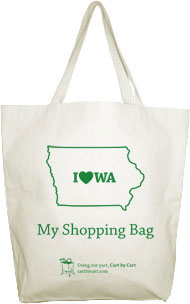 A former Iowa City teacher is taking advantage of a movement to cut the use of plastic grocery bags in favor of reusable tote bags. Joan Burns started Cart by Cart , a company that makes and distributes reusable canvas bags.

Burns says she was just trying to fill a need that existed. She notice articles about cities on the east and west coasts of th U.S. that were banning plastic bags or using incentives to get people to use alternatives.

Burns says she looked around Iowa City and found few options for reusable bags available. Burns got the business going, and then it took off.

Burns says it started with providing bags to grocery stores and in the last six months it has expanded to corporations and businesses that want to give away bags as promotional items. Burns had been a teacher and assistant principal for 17 years, but decided she needed some educational help in Iowa City to get the business going.

Burn says here background in education didn’t fully prepare her to run a business, so she sought advice at the University of Iowa’s Small Business Development Center. She took an eight-week fast-track course on how to run a small business. Burns says it’s nice to see the business doing well, but she says the environmental aspect of it is also exciting.

Burns says she’s delighted to see people bringing reusable bags into grocery stores, whether it’s one of her company’s bags or not. Officials in Iowa City discussed a ban on plastic grocery bags, but then decided to try and encourage people to voluntarily use other bags. Burns says the reusable bag market seems like one that’ll see more growth as attitudes change.

Burns says she’s like to think more and more people will try reusable bags, and is optimistic her business can continue to grow. Burns says one of the biggest things she stresses is for people to remember to take their reusable bags with them to the store. She says it’s not something consumers are trained to do yet.