You are here: Home / Health / Medicine / Woman who lost 120 lbs is inspiration for "Live Healthy Iowa" 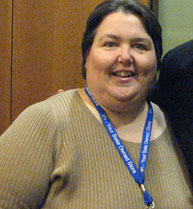 Today is the launch of the 100-day "Live Healthy, Iowa" challenge and a 53-year-old woman who’s lost over 100 pounds in the past year is serving as inspiration for many of the state workers who’re participating.

On January 16th of last year Cindy Jones signed up for the weight-loss challenge and as of today, she’s lost 120 pounds. Jones says she’s done it the old-fashioned way.

"The only way there is to do it: change my eating habits and I do a lot of exercise," she says. "I go to Curves and I just try to eat healthy — and that’s how you do it." Jones, who works in the governor’s office, hopes she’s an inspiration to others who have weight to lose. 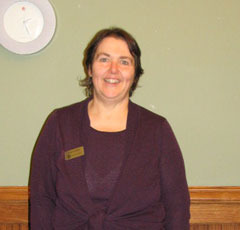 "I’ve had a few people tell me that I’ve inspired them to get started themselves and I always try to be a good example for everybody in our office," Jones says.

"We tend to have a lot of sweets and other types of foods brought in…I told them that starting with ‘Live Healthy, Iowa’ there won’t be any junk food and I’m going to be a real kind of thorn in their side about that, but that’s the way we have to do it."

Jones has found clothes shopping difficult as she’s shed the weight, but Jones says she’s been lucky because a few friends and colleagues have given her clothing. "I’ve made some purchases, but some people will see me running around with baggy clothing once in a while, but I’m trying to catch up now, but I don’t want to get a lot of things because I’m still going down. I’ve got another 50 pounds to go," Jones says. "…I started out at 340 and my goal is 170." Jones says 170 pounds will be a "healthy weight" for her that she’ll be able to maintain it.

"It’s hard to lose weight unless you make a mental and physical decision," Jones says. "…More than 50 percent is definitely psychological and it also depends on just your motivation. I have a granddaughter who’s two and I decided that I wanted to live a long time so that I can enjoy her growing up and her first birthday is kind of when it hit me that I really needed to make some pretty drastic changes in my life, so I have."

Jones lives in Des Moines during the week and goes home to Mount Pleasant on the weekends. She began working in the governor’s office when Tom Vilsack of Mount Pleasant became governor and the current governor, Chet Culver, kept her on his staff. Lieutenant Governor Patty Judge this morning (Monday) kicked off the 100-day "Live Healthy Iowa" challenge this morning with a news conference at the statehouse.