You are here: Home / Weather / Wind Chill Advisory in effect, more snow on the way 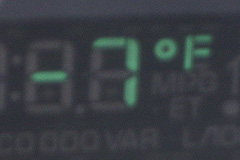 After a Monday filled with snow, ice, bitter cold and fender benders, Iowans need to prepare themselves for Round Two.

A Wind Chill Advisory is in effect this morning for much of the state, while much of the northeastern half of Iowa is under a Winter Weather Advisory. She says new snowfall may only reach two to five inches, but the wind chills may drop as low as 30-below zero.

Albrecht says there may be a warm-up by the weekend. By Sunday or Monday, Iowans could see daytime highs in the 30s. Portions of Iowa were placed under Blizzard Warnings last night due to the high winds blowing the snow that fell yesterday and over the weekend.