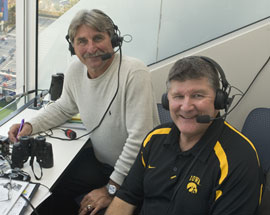 One of the long-time voices of Iowa football is retiring. Iowa football radio color analyst Ed Podolak says he will retire from Iowa’s football broadcasts.

Podolak’s announcement comes on the heels of a recent comment from U-I Athletic Director Gary Barta that he was "disappointed" with Podolak after unflattering photos of the former Hawkeye running back celebrating at the recent Outback Bowl surfaced on the internet.

Podolak issued a statement saying his multi-year contract with Learfield Sports has expired, and he will be 62 this year so "it seems like a good time for a younger ex-hawk to fill the spot." Podolak says he has been wrestling with retirement through last fall as he has relocated his real estate business to northern California, and the resulting commute to the Midwest each weekend has been challenging. Podolak says he hopes to pen his memoirs some day.

Podolak was a prep in Atlantic who went on to star for the Hawkeyes and was drafter by the Kansas City Chiefs in 1969. Podolak played for the Chiefs for nine years and became their second leading rusher. Podolak began working radio in 1982, and continued when the university granted exclusive broadcast rights to Learfield Communications in 1997.