You are here: Home / Agriculture / Vilsack promises to be forward-looking U.S. Agriculture Secretary 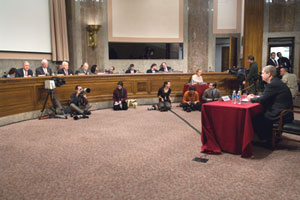 Former Iowa Governor Tom Vilsack says if he becomes the next U.S. Secretary of Agriculture, he’ll work to promote renewable energy as a means of boosting the rural economy.

Vilsack testified before the U.S. Senate Ag Committee this morning, part of the process of winning senate confirmation to the job of ag secretary. Vilsack promised senators he’d be a forward-looking ag secretary and make the U.S.D.A. a 21st-century agency.

"If confirmed, I pledge to work with all the energy I have to do my part to make sure the department of agriculture does its part," Vilsack said, "to do its part in administering a robust farm safety net and create real and meaningful opportunities for farmers and ranchers to succeed."

Vilsack was Iowa’s governor from January, 1999 to January, 2007. Vilsack said now, 2009, is a "crucial time" for the Department of Agriculture. "The last Iowan asked to serve as secretary of agriculture was Henry Wallace," Vilsack said. "He served with extraordinary distinction during a period of historic challenge and I am mindful of the high standard he set, the reforms he initiated and the deep compassion he had for those who work our lands." Wallace was Franklin Roosevelt’s ag secretary, during the depths of the Great Depression.

"Today our country and the Department of Agriculture again face historic challenges. Farmers and ranchers face volatile markets while credit tightens. Small towns and rural communities across the country continue to lose people and jobs while critical infrastructure crumbles," Vilsack said. "These towns and communities find it…increasingly difficult to keep pace with a global economy."

Vilsack mentioned "global climate change," a reduction in U.S. forest lands and the health care crisis as issues he intends to tackle. "All of these serious challenges require a compelling new vision for the department, with the attention, dedication and leadership to make it happen," Vilsack said. "The president-elect has called on each of us to meet these challenges ."

Click on the audio link at the bottom of the page to listen to Vilsack’s opening statement to the committee.

Iowa Senator Tom Harkin is chairman of the Senate Ag Committee and in opening remarks he told his colleagues Vilsack "has a relish" for hard work. "He knows production agriculture," Harkin said. "…He gained a lot of experience the hard way, representing (farmers threatened with foreclosure) during the Farm Crisis of the 1980s."

Iowa Senator Chuck Grassley, a Republican who is also a member of the Senate Ag Committee, said Vilsack is someone who "has been around agriculture and the family farm." Grassley predicted Vilsack’s confirmation would be "swift and speedy." 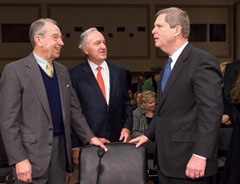 Senator Saxby Chambliss, a Georgian who is the top Republican on the Senate Ag Committee, said he expected the committee and the full senate to be "quickly approving" Vilsack’s nomination so Vilsack and all Obama nominees for cabinet positions can begin addressing the "turmoil" in the nation’s economy.

Chambliss also noted that with Vilsack at the U.S.D.A. and Harkin and Grassley in key positions in the U.S. Senate: "Iowa agriculture is going to be well represented in both branches of government."