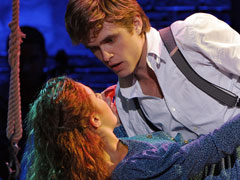 A Broadway musical that focuses on issues like teen sex and intellectual freedom makes its Iowa debut Tuesday night during its first national tour.

While the storyline is in a repressive Germany of the 1890s, "Spring Awakening" is set to modern rock music and explores self-discovery and sexuality through three teenagers.

Actor Kyle Riabko says some critics have said it’s too edgy or too racy for Iowa. "That’s what they said about every single city we’ve gone to and every single city is a lot more grown up than they like to think," Riabko says. "In my mind, people don’t give people enough credit." The show is billed as the new "Rent," another controversial show that saw 97% capacity and grossed $900,000 when it played in Des Moines a decade ago.

Ads for "Spring Awakening" carry disclaimers that it includes mature themes, strong language and brief nudity. Riabko wouldn’t speculate on the ideal minimum age for a member of the audience but says it’ll be eye-opening for some teens — and adults. "If you bring your kids to this show, there will be topics that come up that you’ll have to discuss on the ride home," Riabko says. "For some parents that’s a very good thing. Sometimes it’s hard to know how to open your mouth about things like sex or pregnancy and when you come to the show, it’ll start the talking points."

Riabko is a 21-year-old Canadian and is among those who gets naked on-stage during the show but says it’s never been a frightening or difficult job requirement, given the context. "It’s just very real, " Riabko says. "There’s nothing tasteless about it. I’ve never felt violated doing it. If anything, I feel powerful doing it because the image that it presents is very beautiful when you see the show. It’s by no means pornography. It’s just a necessary image to show people."

The production is based on a German play that’s more than a century old and Riabko says it’s set in that puritanical era, and yes, it does feature modern rock songs. "When our characters are at a point where they just need to reach out to grab something, to say something, they reach into their 1890s jackets and pull out a microphone and start singing a rock score," Riabko says. "It’s a very absurd thing to see at first but when you go through the whole show, it becomes natural. It’s just a way of drawing a parallel."

The show runs through Sunday at the Civic Center of Greater Des Moines.