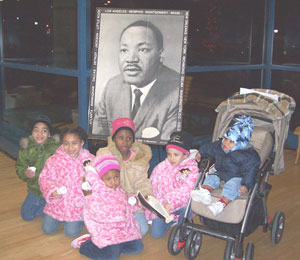 All the seats in the Historical Building’s theater were filled so people sat and stood in the aisles.

They were greeted by Linda Carter-Lewis, president of the Des Moines chapter of the National Association for the Advancement of Colored People — the N.A.A.C.P. "This is Reverend Martin Luther King and the eve of a momentous, historic event — the inauguration of Barack Hussein Obama," she said.

The crowd clapped, then got to its feet and cheered for over a minute. A woman in the front row kept repeating the word "hallelujah" and the NAACP president said, "God Bless America," as the crowd wound down, only to start up again after Carter-Lewis mentioned the role Iowa’s Caucuses played in Obama’s campaign.

The crowd sang familiar songs, like "This Land Is Your Land" and "The Battle Hymn of the Republic." The crowd repeated the same pledge which was said tonight at the Martin Luther King celebration in Washington, D.C. Videos were played featuring snippets of Dr. King’s and Obama’s speeches. The crowd applauded well-known passages, and any reference to Iowa. Finally, the crowd gathered outdoors, lit candles, said a prayer and sang a couple of songs. 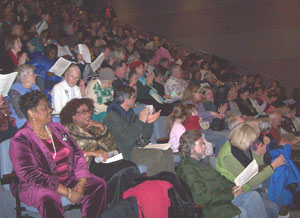 Before they left, though, Kittie Weston-Knauer of Des Moines collected pieces of paper from over a hundred people who promised to heed Obama’s call to work for a food pantry, women’s shelter or other service organization.

"These are commitment forms from people of all ages, of all ethnicities and what this says is that people really believe in what is about to occur and they are actually going to get a chance to live this," Weston-Knauer says. "It’s happening. It’s truly happening and that’s what’s so beautiful about all this."

Jan Melbey of Ames says she was thrilled to be in the crowd. "Just the excitement of the evening and all the great things that are going on," Melbey said.

Dr. Keith Madison of Des Moines was 14 years old in 1963, standing with thousands in Washington, D.C. when Martin Luther King gave his famous "I Have a Dream" speech and he was sitting near the front of the crowd tonight to mark King’s holiday. "Everything I can do around the Martin Luther King theme just sort of reinforces that and kind of gives it meaning," Madison says "because I think it brings it full circle."

Beverly Robinson of Des Moines often attends events celebrating Dr. King’s holiday, but this year’s was different for her because the nation’s first black president will take office tomorrow. "I’m just thinking about it now as I’m walking out and just how monumental it’s going to be," Robinson said after last night’s event, "and I just can’t wait to see every single step of it."

Reverend Keith Ratliff of Des Moines commented on the circle of Iowans who came out tonight, as whites made up a majority of the crowd. "It says a lot about Iowa, great things about Iowa," Ratliff says. "I was always glad to hear President-elect Obama in many speeches talk about how it started here in Des Moines and it started here in Iowa and he has made many proactive statements about our state, and so it makes me proud as an Iowan."

Judy Reha was one of those white faces in the crowd. "And that’s what it’s all about is coming together and the diversity, bringing everybody together," she said. "We’re all in this together."

Kimberly Reed of Des Moines, one of the African Americans in the crowd, didn’t want to miss last night’s event. "I have to come out every year to honor Dr. King," she says. "And it’s a double whammy because of Obama, so it’s great."

Mary Campos of Des Moines, a longtime Hispanic activist in Democratic Party politics, says she’ll be eagerly watching Obama take the oath of office and give his inaugural speech Tuesday morning. "We’re all going to rejoice and praise the Lord and look forward to another century, you know, where we will all be crossing that bridge together," she says. "We don’t need walls. We need bridges."

On Tuesday evening Campos will co-host an inaugural gala in Des Moines called "Brown, Black and the Blues."