You are here: Home / Politics / Govt / Branstad critical of Culver and Democrat spending 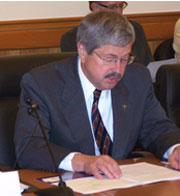 Iowa’s longest-serving governor is critical how the state’s current leaders are spending money and suggests Iowa’s financial house needs to be put “back in order.”

Former Governor Terry Brandstad, the Republican who was Iowa’s top executive from 1983 to ’99, says he has big concerns about Iowa’s future as current Governor Chet Culver and fellow Democratic state lawmakers try to bring about economic stability.

“Culver came in at a very good time with surpluses, his party in control of the legislature. Unfortunately, the last two years, they’ve overspent and now the state’s got to make some tough financial decisions,” Branstad says,”I think of just borrowing money or trying to spend ten years lottery revenue in one year, that might get you through one year but what are you going to do beyond that?” Branstad says Iowa lawmakers are facing a difficult chore as the state now faces a massive budget shortfall.

“They need to make some fundamental restructuring decisions like we did back in 1986 during the Farm Crisis,” Branstad says. “We reorganized and downsized state government and like we did with the Fisher Commission back in 1991 when we looked at ways to control and bring down the level of spending and put in place things like the cash reserve.”

The state maintains emergency cash accounts, so-called rainy day funds, that were not there during Branstad’s tenure as governor. Branstad says: “Those are still there. Unfortunately, a lot of that money has been shifted for other purposes and I think they need to get the safe financial house back in order.”