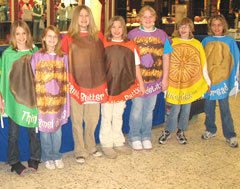 In the midst of a salmonella scare and a widespread peanut butter recall, the Girl Scouts of America is launching its annual cookie sale.

Megan Murphy, spokeswoman for the Girl Scouts of Greater Iowa with 13,000 members in 71 Iowa counties, says their cookies that contain peanut butter have been checked out — and they’re safe.

Murphy says their baker, ABC Bakers, has had the FDA come in and do extensive testing in the past week. "FDA has informed them everything is fine, there are no issues and the samples taken show no contamination," she says. For more than 90 years, she says girls in Iowa and nationwide have been learning valuable life skills by selling Girl Scout cookies.

Murphy says: "The cookie sales are huge for the Girl Scouts. Girls use this time to earn money for troops so their troops can do trips or other things together or buy themselves books and things that they need out of the shop. It also is one of the nation’s premiere financial literacy programs so we’re really helping girls build leadership skills that we want them to be able to use throughout their lives."

The cookie sales comprise about 60% of the revenue for the Girl Scout council and they’re also the main source of revenue for the troops. "It’s big — it’s millions of dollars," Murphy says. "It’s a huge sale for us and it helps keep our organization going and helps keep troops going so it’s really important that we are successful with cookies."

The cookies made by ABC for the Girl Scouts are Peanut Butter Patties and Peanut Butter Sandwiches — the patties are traditionally the number-three seller. Peanut Corporation of America has recalled its peanut butter and peanut paste after the products were linked to six deaths and nearly 500 illnesses nationwide, including at least two cases in Iowa.

Health officials are telling people to avoid crackers, cookies and other foods containing peanut butter until the investigation is done. Peanut butter sold in jars is not affected.