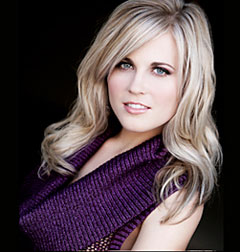 A southeast Iowa woman will tap dance on national television tonight in her quest to become Miss America.

Twenty-two-year-old Olivia Myers of Sperry says being in Las Vegas as Miss Iowa is, in her words, pretty surreal.

"I sometimes need to just step back and think about what it is that I’m actually doing and I still can’t believe it," she says.

After becoming Miss Iowa, Myers took a year off from the University of Iowa where she’s a history major in the social studies education program.

Each of the 52 Miss America contestants creates a platform for the issues she’d pursue as the crown-winner. "Mine is called teaching tolerance," Myers says. "I’m going to be a teacher so it’s focusing on character education, specifically, fostering respect in the classroom."

As for the talent category of the contest, Myers plans to tap dance for all she’s worth. "The routine is a little bit different than anything I’ve done before," Myers says. "I wanted to step out of the box and challenge myself this time since I was going for Miss America and I’m really looking forward to performing it. I hear the stage is huge at the Planet Hollywood Theatre so it’ll probably be the biggest stage I’ve ever danced on in front of the biggest audience I’ve ever performed for."

The highest an Iowan has ever placed at Miss America is first runner-up, but Myers hopes she’ll be the first woman from the Hawkeye State to wear the crown.

"My life would change dramatically. Miss America doesn’t really have a home for the year, travels, lives out of a suitcase and goes from one location to the next. It would be quite exciting, a lot of opportunities." The pageant airs on TLC at 7 P.M.