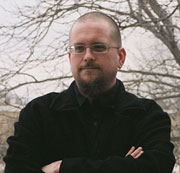 A novelist from Omaha-Council Bluffs says he’s taking the horror story of vampires back to the basics, but with new twists on the dark road.

Marcus Pelegrimas says vampires are glittering, romantic figures in the popular new "Twilight" series, but in his new story, "Blood Blade," vampires are again the villains.

"I’m more from the old school, more like a horror type of standpoint where vampires and werewolves should be the bad guys. The way things are going right now is where vampires are ‘How sexy can they be?’ Everyone’s forgotten that they’ll bite you." The 37-year-old writer says he’s eliminated the traditional ways to kill the fanged foes — and werewolves, too — and is re-inventing the monsters.

"This whole series is years and years of me as a fan thinking why does this work? Why would silver work on a werewolf? Why do vampires burn in the sunlight? If these things were real, what things would really work against them?" Pelegrimas says he’s thrilled vampires are "in" again, thanks to the "Twilight" books and the blockbuster movie, but that popularity only goes so far.

Pelegrimas’ "Blood Blade" will be the first in his series about Skinners, a dwindling race of humans who pursue and slay the supernatural creatures. "Blood Blade" goes on sale Tuesday. Pelegramas says he’s written 50 to 60 books in several genres — western, mystery, horror and fantasy — under pen names and as a ghostwriter. This new book is the first he’s published under his given name.