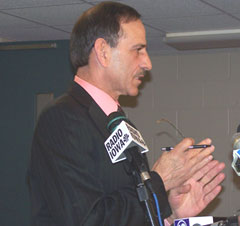 State prison officials are releasing 15 convicted sex offenders, saying they’ve been forced to do so because of two Iowa Supreme Court opinions.

The justices on Friday ruled some convicted sex offenders who refused to participate in a sex offender treatment program still should have been accumulating "good behavior" time — to be subtracted from their overall sentences.

As of January 1st, 2001, state law specified inmates who failed to participate in sex offender treatment programs while they’re in prison may no longer accumulate that "earned time" for good behavior behind prison walls. Iowa Department of Corrections director John Baldwin and his staff reviewed the records of sex offenders sent to prison before January 1st, 2001, and who had refused to participate in treatment.

As a result, the Department of Corrections listed the names of 12 inmates they say will be released as a result of the high court’s ruling. A document issued Monday afternoon by the Department of Corrections indicated 15 inmates would be released – the 12 inmates listed today and the three who were listed in the two Supreme Court rulings issued Friday.

Department of Corrections officials met with the media at 2:30 p.m. today to discuss the situation. Click on the audio link below to listen to the news conference. Find a list of the 12 convicted sex offenders who are scheduled for release here, as well as links to the court rulings which list the three other offenders who are being release.