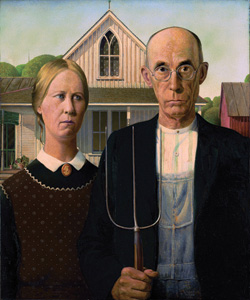 One of the most famous paintings in American history will be on display in central Iowa over the next two months. American Gothic by Cedar Rapids native Grant Wood will be unveiled tonight at the Des Moines Art Center .

Art Center director Jeff Flemming says the piece is on loan from the Art Institute of Chicago, which purchased the piece shortly after its creation in the 1930s.

“Since that time, it has stirred the American imagination for a variety of reasons. For one, there’s a mystery surrounding the work,” Flemming said.

That mystery exists because Wood never clearly defined his intentions with American Gothic during his lifetime. Instead, Wood only offered hints as to why he decided to paint a sour faced woman and a man with his pitchfork standing in front of a farm house. Flemming believes the painting remains popular today because of its “nostalgic and somewhat satirical view of the heartland.”

American Gothic , which vaulted Wood to fame, will remain at the Des Moines Art Center through March 29th. It’s one of 70 pieces that are part of the Art Center’s exhibit titled “After Many Springs: Regionalism, Modernism & the Midwest.”

The exhibit examines the similarities of what was happening in art world in the 1930s. Flemming says many pieces of the time – whether produced by Grant Wood in Iowa or Jackson Pollack in New York – featured similar themes.

“Many of these artists were very adamant about the social ills that were plaguing the country at the time,” Flemming said. “There was the economic upheaval of the Great Depression and there were ecological disasters…the dust bowl was a perfect example of that. Racism was rampant in the United State at that time and several of the paintings in the show, by John Steuart Curry for example, certainly deal with the notion of racism.”

The backdrop used for American Gothic is still standing in southeast Iowa. The house is located in Eldon and attracts thousands of tourists a year. The models used in the painting were Wood’s sister and his dentist.