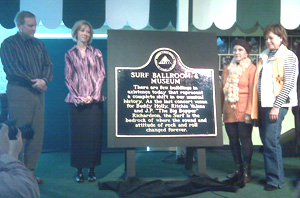 The Rock and Roll Hall of Fame and Museum named a facility in north-central Iowa Wednesday as an historical rock and roll site.

The Surf Ballroom is just the ninth historical landmark designated by the Hall of Fame and the recognition coincides with the 50th Anniversary of the Winter Dance Party concert – which was the last concert for Buddy Holly, Ritchie Valens and The Big Bopper.

Hall of Fame executive director Terry Stewart read the words posted on a marker that will be placed in the Surf’s lobby, "There are few buildings in existence today that represent a complete shift in our musical history. As the last concert venue for Buddy Holly, Ritchie Valens, and J.P. ‘The Big Bopper’ Richardson, the Surf is the bedrock of where the sound and attitude of rock and roll changed forever."

Stewart says his organization is proud to recognize The Surf as one of rock and roll’s historic places. "It’s a thrill to memorialize locations like the Surf," Stewart said. "We’re thrilled to put one of our plaques here." Buddy Holly’s widow, Maria Elena Holly, as well as Ritchie Valens’ sister, Connie Lemos, were on hand for the ceremony. Lemos remembered the first time she stepped into the Surf decades ago.

"When we walked into the Surf…I actually expected Ritchie to come out and say ‘where you guys been?’ That’s how close he felt," Lemos said. Other historical rock and roll landmarks have been placed at the Whisky-a-Go-Go in Los Angeles, where the Doors were resident performers, The Crossroads in Clarksdale Mississippi, which is known as the cradle of blues, and Brooklyn High School in Brooklyn, Ohio, where Elvis played his first concert north of the Mason-Dixon Line.

The photo above left to right: Dale Snyder of the Snyder family who owns the Surf Ballroom property, Laurie Lietz, executive director of the North Iowa Cultural Center and Museum, the group that oversees the operation of the Surf, Maria Elena Holly, widow of Buddy Holly, Connie Lemos, sister of Ritchie Valens.