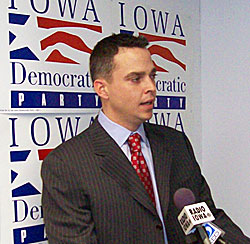 A 33-year-old who’s a member of the Des Moines City Council is the new chairman of the Iowa Democratic Party. Michael Kiernan describes himself as part of a “new generation” of Democrats. “I don’t think we’re at the top of our game,” Kiernan said Saturday. “I think we’re still climbing.”

Kiernan was the choice of Governor Chet Culver, a Democrat who’s running for re-election in 2010, and earlier today the Iowa Democratic Party’s State Central Committee elected Kiernan party chair. “I think there’s a tremendous opportunity for the Iowa Democratic Party coming off of the last election cycle,” Kiernan told reporters at a Saturday news conference. “We have over 100,000 new registered voters in this state that are Democrats, hundreds of new activists and I think our key is to keep these folks in the party, to bring them home permanently.”

Democrats had a bad year at the polls in 1994, the election after Bill Clinton won the presidency, and Republicans had a bad year in 2006, the year after George Bush won his second term. Kiernan dismisses the idea 2010 may be a down year for Democrats, partly because of the new voters Barack Obama signed up in Iowa for the 2008 Caucuses. “I’m not going to give you the whole playbook today, but I’ll tell you this: we’re going to use new technology, social platforms and grassroots engagement to really bring these people home to roost. I mean, we’re there. We’re up by over 110,000 registrants and now it’s about telling these folks that they’re welcome in our party and making sure they know they have a seat at our table permanently,” Kiernan says. “And that’s what we’re going to set out to do.”

Kiernan ran Governor Culver’s campaign for secretary of state in 1998 and Kiernan considers Culver’s re-election in 2010 his top priority as party chairman. Kiernan would not say whether he’ll run for re-election to the Des Moines City Council in November.  “I plan on making a formal announcement about that at the next council meeting,” Kiernan said. “I’d like time to talk with fellow council members.”

Republican Charles Grassley will be up for re-election in 2010, too, and Kiernan was asked if Democrats would have a candidate to challenge Grassley. “You know what, (I) just got on the job five minutes ago,” Kiernan said. “Give me a day or two.”

Hear more of what Kiernan had to say today by clicking on the audio link below.