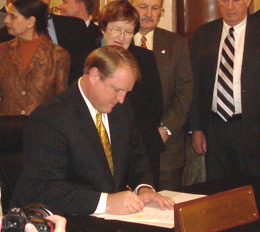 Jeff and Shannon Gardemann of Cedar Rapids were invited to the midday bill signing ceremony at the statehouse. T

he couple and the three grandchildren they’re raising have moved to Shellsburg because they lost their Cedar Rapids home to the flood waters. "We had 14 feet of water in this house," Jeff Gardemann says. His wife adds the family "didn’t get the privilege" of going back once flood waters receded and claiming many possessions. "It was hard," she says.

Forty-five-year-old Jeff Gardemann works as a crane operator in Cedar Rapids and the family’s income was too high to qualify for the state’s "JumpStart" program which provided some mortgage help and other assistance to flood victims. The bill the governor signed into law today changes income eligibility for the JumpStart grants. "It’d be nice — it was kind of put to us this will help us pay down S.B.A. loans," Gardeman says. "As it stands, if we paid this thing off full-term, I might not retire to my mid-70s. I know that probably won’t happen because we’ll work hard to pay it down no matter what, but I didn’t want to work that long."

Jeff and his wife took out a loan to pay their new mortgage, as well as their new old mortgage on the house that’s no longer habitable. "You can’t just let the other go. It’s still our property," Jeff Gardemann says. "Basically, we have river-through property in Cedar Rapids. The couple still is retaining a sense of humor about their plight, as Shannon adds: "We say that we winter in Shellsburg and summer in Cedar Rapids."

The Gardemanns made their trip to the statehouse today wearing clothes they didn’t own at this time last year, as they narrowly escaped from their home as the waters rose higher in their neighborhood than anyone had expected. "We packed a couple of suitcases and prayed for the best, but we lost," Shannon Garemann says. "We did our best — put things up on kitchen tables and counters…but when we got back down there (everything was destroyed)."

A number of local elected officials attended today’s bill signing ceremony, including the mayor of the flood-struck community of Oakville and the tornado damaged town of New Hartford. Waterloo Mayor Tim Hurley, president of the Iowa League of Cities, told the crowd the $56 million in state aid give Iowa storm victims a "sense of hope" as well as stability. "This bill’s assistance is much needed as our residents and businesses and nob-profits labor with repairing or replacing not just their homes and businesses and offices, but their lives and livelihoods," Hurley said.

Lieutenant Governor Patty Judge praised Iowans for helping their neighbors through the month-long sring of natural disasters that started May 25th when a powerful tornado struck Parkersburg and New Hartford. "I want to thank the countless Iowans who have fought so hard to save their communities," Judge said. "We know the last eight months have not been easy."

According to Governor Culver. individual Iowans may now be eligible for grants of up to $2500 to cover a variety of disaster-related expenses, even things like child care and clothes, as a result of the bill he signed into law today. "As I’ve said repeatedly, this process will take years not months so this bill must be the first step of many we will take together this session and in subsequent sessions in our common efforts to help address the unmet needs of Iowans who were impacted by the disasters."