You are here: Home / Crime / Courts / DNR cracks down on drunken snowmobilers 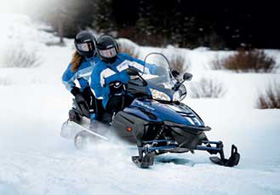 Snowmobilers are enjoying what Mother Nature has delivered to Iowa this winter.

But, conservation officers with the Department of Natural Resources are finding quite a few of those snowmobilers are driving drunk.

The D.N.R. arrested 10 snowmobile operators for O.W.I. over the last two weekends in north-central and northeast Iowa.

Ken Lonneman, a conservation officer in Clear Lake, says the enforcement projects involved the D.N.R. and the Iowa State Patrol. "They provided an airplane and called us to where the biggest snowmobile activity was…it just makes it more time efficient for us," Lonneman said. Several snowmobilers were also cited for not having registration and failing to stop at an intersection.

Snowmobilers, like motorists on the road, are considered "drunk" if their blood-alcohol level is .08 or more. "What was most shocking about our operation was some of these snowmobile operators were two or three times over the legal limit," Lonneman said. "It wasn’t like they were just a little over, they were way over (the legal limit)."

Despite the heavy snow cover this winter, there have not been any reports of any serious crashes or fatalities involving snowmobiles in Iowa. There are 28,000 snowmobiles registered in the state.