You are here: Home / Fires/Accidents/Disasters / Melting of snowpack now could prevent flooding later 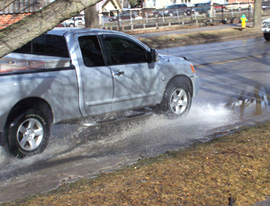 Most Iowa ditches and gutters resemble small rivers lately as a few days of unseasonably warm weather are bringing a melting of the deep snow pack. Jeff Zogg, a hydrologist at the National Weather Service, says the sustained warmth is ideal for helping the region to stave off potential flooding this spring.

Parts of northern Iowa, especially areas north of Highway 20, have gotten heavy snow this winter. While high temperatures have been in the 40s and 50s across much of the state the past several days, the snow piles are far from gone in many northern Iowa counties. "The snow pack will remain in place in most locations," Zogg says. "Some of the snow depths up there in the northern parts of the state are ten inches or more still. It’ll be difficult to melt that amount of snow in just a day or two."

He says the snow line, where the snow stops and the bare ground starts, is definitely moving north and will continue to do so over the next few days. Even with this heavy melting of snow, Zogg says there’s still a risk for high water in a few months. Zogg says: "The risk of moderate to major flooding this spring is near-normal, and having said that, the risk of that happening is typically pretty low across the state. Even though we’re melting the snow now, there’s definitely potential to add to the snow pack because winter is not over yet."

He says any risk of flooding this spring would be minor flooding. In the meantime, rain showers are possible over the next few days with another cool-off mid-week and the chance of snow Wednesday night and the likelihood of more snow this weekend.