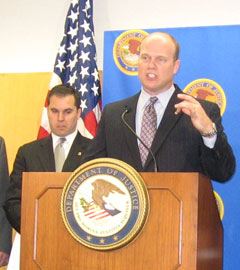 A New Jersey-based company, which has an office in Coon Rapids, Iowa, is facing charges of visa and mail fraud. Eleven people were arrested Wednesday in connection with the case in six states.

In addition, prosecutors allege the tactic displaced American workers that were qualified to fill those positions in those coastal locations. Whitaker calls Vision Systems Group an I-T company and says the foreign workers were hired for advanced computer programming positions.

"These fraud schemes are not only very sophisticated in their use of Iowa as a location to drive down the prevailing wage that they can pay their workers – and then farm them out to more higher-wage, populated areas – but also how lucrative it is for the individuals that are behind these schemes," Whitaker said. The indictment claims the illegal maneuver may have saved the company more than seven-million dollars. Whitaker called the 18-month long investigation the "tip of the iceberg" and expects similar arrests in the future.

"I think we fully expect…there are other targets and other companies that are similarly situated," Whitaker said. Michael Aytes is the acting deputy director of U.S. Citizenship and Immigration Services. He calls Vision Systems a legitimate company, but claims its top officials took advantage of a "vulnerability" in the program, called H-1-B, that allows businesses to bring foreign workers to the U.S.

"Any program, public or private, as good as it may be, is vulnerable to fraud," Aytes said. "What we found here is that some folks have found some ways to make misrepresentations to the government – that disadvantaged American workers who did not have an opportunity to apply for the real jobs that existed. It illustrates a need for greater diligence in the process. That’s going to be our focus at C-I-S moving forward."

Whitaker’s announcement this morning coincided with the arrest of two men for immigration-related fraud charges in Clinton. The two cases are not related. "They’re similar…I would call it a sister-case," Whitaker said. "It’s a very similar enforcement effort and our office was involved, but we’re not alleging they’re related." According to court papers, the two men charged in eastern Iowa, both have lived in Fairfield and Clinton and worked at a Clinton-based computer software company called Sana Systems.