You are here: Home / Weather / Snow returns to Iowa 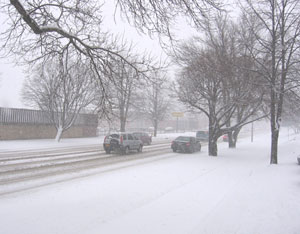 Winter has returned to parts of Iowa today. National Weather Service Meteorologist Craig Cogill says the storm has played out pretty much as forecast – with the heaviest snow along and south of Interstate 80.

"We had a pretty sharp cutoff and didn’t see as much snow up around Highway 30 as maybe we had thought previously," Cogill said.

"But, for the most part, we are seeing the snow pretty much where we expected across southern Iowa." By mid-afternoon, three to five inches of snow was reported across southwest Iowa where 15 counties are under a Winter Storm Warning until 9 P.M.

Cogill expects that area of the state to wind up with 4 to 7 inches of snow. Schools across the region dismissed early today as roads quickly became coated with a thick blanket of heavy, wet snow. Plows had trouble keeping up with the snow, which was falling at a rate of one to two inches per hour.

The precipitation will come to an end tonight. Cogill says no more snow is expected this weekend and high temperatures will be in the low 30s.